A Tanzania safari is nothing without the Ngorongoro Crater! The Ngorongoro crater is a gateway to the Northern circuit Big Five and its one of the most beautiful natural wildlife safari destinations in the world and a unique place to interact with the Masai.

The Ngorongoro Crater and surrounding highlands of Karatu together with the volcanic craters form stunning backdrops to some of the most fertile and richest grazing grounds in Africa. The crater is the world’s largest intact volcanic caldera and home to the highest density of big game in Africa making Ngorongoro one of the continent’s most famous safari destinations.

HOW TO GET TO THE NGORONGORO CRATER

Ngorongoro Crater can be reached by road or by flight. By road the distance from Kilimanjaro International airport to Ngorongoro crater is not a long one and it takes approximately Four hours.

We book for you a 4*4 safari car to do all the transfers right from from your arrival at Kilimanjaro until your departure to you home country.

You can also fly into Ngorongoro crater from Arusha airport or Kilimanjaro airport.

WHEN TO VISIT THE NGORONGORO CRATER

Ngorongoro Crater is known for its unique micro-climate and harbors wildlife all year round and therefore there is no good or bad time to visit the crater. However the crater floor gets busy with vehicles and travelers during the high and peak seasons the reason we recommend our clients to visit during low season. Lake Magadi also experiences higher levels of water which attracts higher concentrations of flamingos hence a guaranteed memorable safari action. 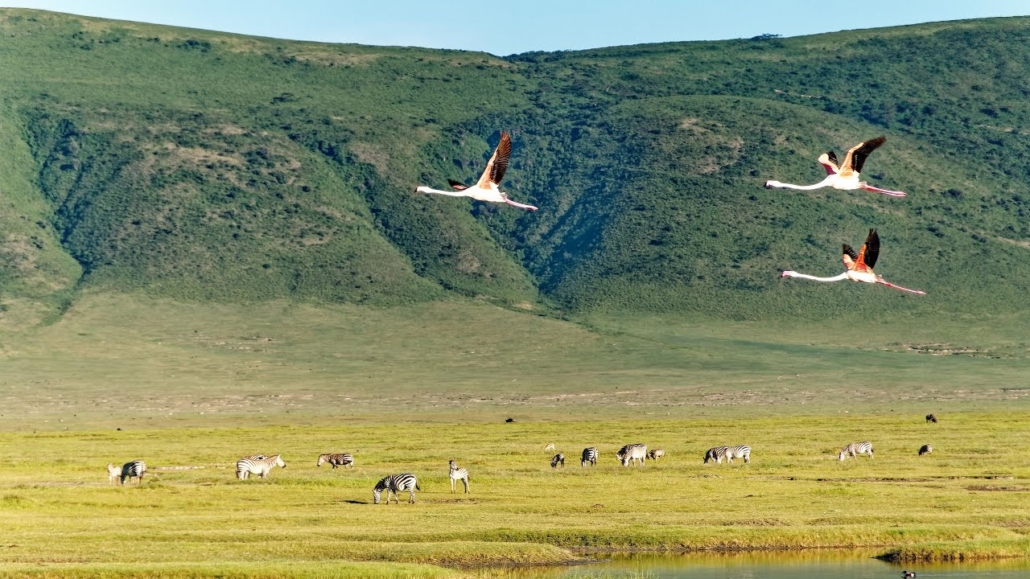 HOW DID THE NGORONGORO CRATER FORM?

The Ngorongoro crater is a UNESCO World heritage site which was formed as a result of an explosion of a giant volcano which collapsed three million years ago. The cone of the caldera collapsed inwards and created what today is known as the most unique wildlife harbors in Africa and the world at large.

The Ngorongoro Crater is home to the ‘Big Five’.  In Ngorongoro crater you will find a good population of Black rhinos, elephants, lions, leopards and hyenas along with healthy herds of wildebeest, buffalos and zebras.  Other wildlife species here include cheetah, jackal, Grant’s and Thompson’s gazelle, flamingo and bat-eared foxes as well as approximately 400 species of bird.

While in the Ngorongoro crater, you are limited to only game drives. There are a couple of picnic spots in the park but getting out of the vehicle is strictly limited to certain areas. Other activities you can do in the wider Ngorongoro Conservation Area walking safaris, excursions to Olduvai Gorge and visiting the Masai village.

WHERE TO STAY IN THE NGORONGORO CRATER?

When choosing where to stay in the Ngorongoro crater there are two options, whether to stay at a hotel on the Crater rim to have a wonderful view or staying a little way away from the Crater in nearby Karatu.

Where you stay does not impact the quality of your Ngorongoro safari but the minimal advantages of staying at Karatu is the fewer crowds, smaller and intimate lodges’ .The Serena and the Sopa lodges  have stunning views of the Crater floor but cannot beat Ngorongoro crater lodge.

Away from the Crater rim in Karatu  is a variety of small guesthouses costing somehow the same cost as the Serena and Sopa.These are much more charming and characterful but obviously lack the fantastic Ngorongoro views.

Want to join the discussion?
Feel free to contribute!